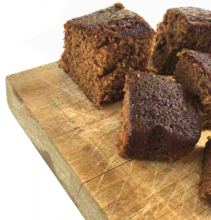 Here we feature one of our favourite Angie cakes - a wonderful rich and moist ginger delight.

Place the stout and 200g of the muscovado sugar in a large saucepan and slowly bring to the boil, working out any undissolved lumps of the sugar with the back of a spoon. Be careful it doesn’t boil over.

Remove from the heat and stir in the bicarb, which will make the mixture fizz.

Sift the flour, ground ginger and cinnamon into a large bowl. In a separate bowl, whisk together the eggs, remaining muscovado sugar, caster sugar, ginger syrup and melted butter. Slowly beat this into the flour mixture. Next fold in the beer mixture half at a time.

Finally, stir in the chopped pieces of ginger, along with the grated fresh ginger. Pour the mixture into a lined, rectangular cake tin, 36 x 22cm. Give the tray a couple of sharp taps against the work surface to bring up any bubbles.

Bake for approximately 40 minutes. Leave to cool before eating.

Variations: Instead of incorporating the stem ginger and its syrup into the cake mix, you might like to put just half the chopped ginger into the mixture and sprinkle the rest on top when you take the cake out of the oven, drizzling the syrup over the cake at the same time.